We are here for you.

We have answers right now!

Check Out Our FAQs Page

Not a phone fanatic?

Send Us An Email

Are you looking to lead a healthier life? The journey towards wellness starts with how you hydrate: hydrogen is key to faster and long lasting hydration. With countless benefits for health and wellbeing, Tyent is at the forefront of a hydrogen water revolution. Molecular hydrogen (H2) is known to protect cells and tissues from oxidative damage. Unlike other molecules, hydrogen can cross cell membranes and target subcellular structures, including the mitochondria of each cell. Drinking hydrogen-rich water has numerous fantastic benefits. Keep reading to learn more!

The first element on the periodic table is also the most abundant in the universe. Hydrogen is composed of a single proton and a single electron. Researchers estimate that at least 90 percent of the known universe is composed of hydrogen. Without being bound to any other element, this tiny molecule is freely available to be absorbed, incorporated, or dissolved.

LetŌĆÖs look at the relationship between ionized alkaline water and hydrogen water. Ionized alkaline water is produced by electrolysis, enabling the ŌĆ£freeŌĆØ and available hydrogen gas to dissolve into water. The presence of hydrogen gas gives alkaline water many of its benefits and itŌĆÖs no wonder that so many people are excited about it. Natural springs in countries such as Japan, Mexico, India, and France contain dissolved hydrogen gas. It is these springs to which people flock, to discover the therapeutic properties of the water for themselves. Our ancient forefathers knew that water with hydrogen was beneficial to long-term health!

Hydrogen ŌĆō Where It All Begins

Water (H20) is comprised of two hydrogen atoms for each oxygen atom. Hydrogen gas is the chemical formula H2. ItŌĆÖs also the smallest molecule and can diffuse quickly in the body at the cellular level.

ŌĆ£It is not an overstatement to say that hydrogenŌĆÖs impact on therapeutic and preventive medicine could be enormous in the future.ŌĆØ

Hydrogen water is worth getting excited about. As well as the many benefits of drinking hydrogen water, studies show that ŌĆśhealing springsŌĆÖ around the world - in Japan, Mexico, India and famously, Lourdes in France - are genuinely therapeutic as they contain dissolved hydrogen gas. These previously mythical ŌĆśfountains of youthŌĆÖ have emerged as being relevant to modern-day science and the constant quest for ways to improve our health. 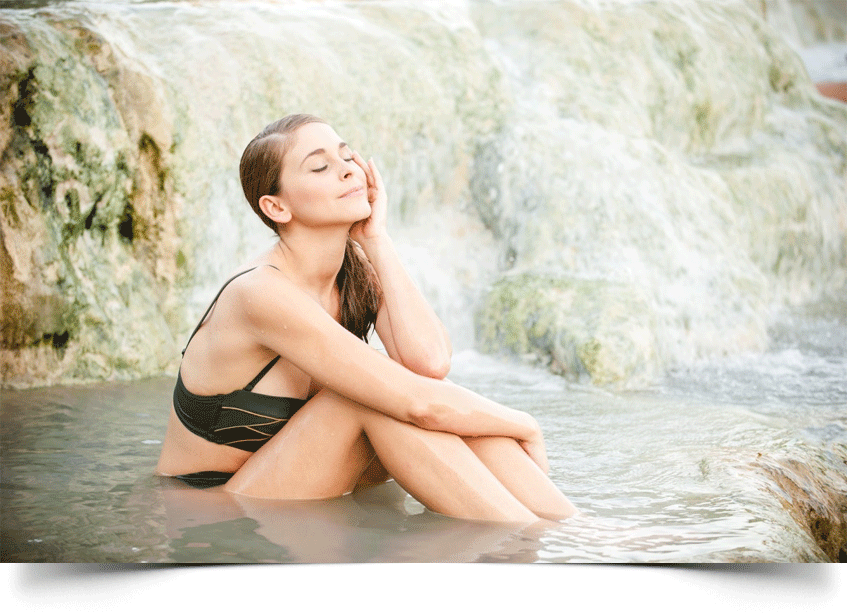 ItŌĆÖs amazing to think that our forefathers knew about hydrogen water and its benefits, before science caught up and gave us the tools to understand why ŌĆśtaking the watersŌĆÖ really does work.

We all breathe oxygen to survive, but did you know that we donŌĆÖt utilize all the oxygen that we breathe? Unused oxygen converts to free radicals, which can attach to other cells in the body. Once attached, oxidation starts. This kind of decay can damage cell proteins, lipids, and even your DNA. But donŌĆÖt panic. If you drink hydrogen-rich alkaline water, you can battle those pesky free radicals by delivering a slew of hydrogen molecules to stop them in their tracks. Alkaline water effectively neutralizes free radicals.

Dr. Nancy McClellan DC Dipl. Ac. tells us:
"Tyent Water, along with all of its other benefits, neutralizes free radicals in a very effective manner."

Hydrogen water can also combat degenerative diseases. In 2008, a team of Japanese researchers carried out an experiment using 30 subjects with type 2 diabetes. Over an eight-week period, the subjects were given hydrogen-rich water to drink every day. The results showed improvement in their diabetes-related symptoms.

Now that you know more about the incredible benefits of hydrating with hydrogen, please let us know if you have any questions or concerns. One of our friendly water specialists will be happy to help!

Hydrogen water and water ionizers are enormously popular in Japan. In 2008, a team of Japanese researchers carried out an experiment using 30 subjects with type 2 diabetes. Over an eight-week period, the subjects who were given hydrogen-rich water to drink every day presented with measurable levels of improvement in their diabetes-related symptoms.

Smile! Hydrogen Water and Your Mouth

A study published in 2014 on the anti-aging effects of hydrogen-rich water on periodontal tissue, indicated that the experimental group of test subject rats which were given hydrogen-rich water, presented with lower periodontal oxidative damage at 16 months of age than the control group, which had been given distilled water. Alkaline water also helps to neutralize the acids in your mouth after eating.

ItŌĆÖs the same thing. A rose by any other name. For an overview of how hydrogen water and alkaline water are one and the same, check out our article on the topic.

How Does the Hydrogen Get into My Alkaline Water?

Ionized alkaline water is produced by electrolysis. It is this process that enables freely available hydrogen gas to dissolve into the water.

How Does the Hydrogen in My Alkaline Water Help My Body?

The benefits are multiple and widely documented around the world. From your metabolism to eye health and almost everything in between, drinking hydrogen water is an awesome way to support good health!

Can Hydrogen in Alkaline Water Help to Reduce Cholesterol?

Is Drinking Ionized Alkaline Water the Best Way of Getting Hydrogen into My Body?

Yes. Drinking hydrogen-rich ionized water is easily the most efficient way to benefit from the goodness of molecular hydrogen.

Countless athletes and keep fit enthusiasts think so! Staying hydrated will increase your energy, and drinking ionized alkaline water is even better. The hydrogen boosts the power-house mitochondria of each cell, keeping the cell ŌĆō and you! - energized.

HereŌĆÖs the thing: hydrogen water tastes way better than regular water. Most people immediately notice the pure, clean taste. The fact that this great-tasting drink is so good for you is just all-round good news!

Whatever method of water-cooking you use; steaming, bain-marie, boiling; itŌĆÖs fine to use alkaline water. Just bear in mind that some of the hydrogen will be lost to the cooking process, but otherwise, donŌĆÖt hesitate.

Is It Possible to Drink Too Much Hydrogen?

Not really. Even if you drink lots and lots of hydrogen-rich water, the hydrogen itself remains at zero toxicity. Any hydrogen that your body cannot use will naturally and harmlessly dissipate.

The Future is Bright... 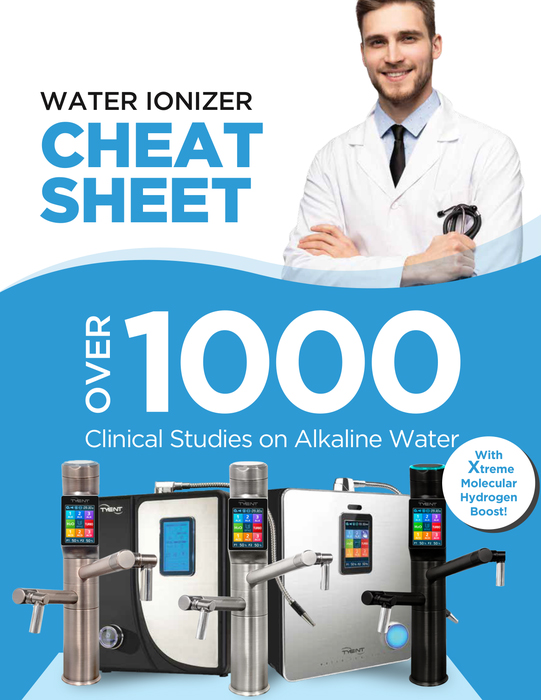 We are going to start hearing and reading more and more about the benefits of hydrogen, as scientists complete and commence further studies into how we can improve our health by maximizing our hydrogen intake. Stay tuned!

Enjoy delicious hydrogen water every day - check out our range of water ionizers or download our fabulous Cheat Sheet to find out which water ionizer is the perfect fit for you! 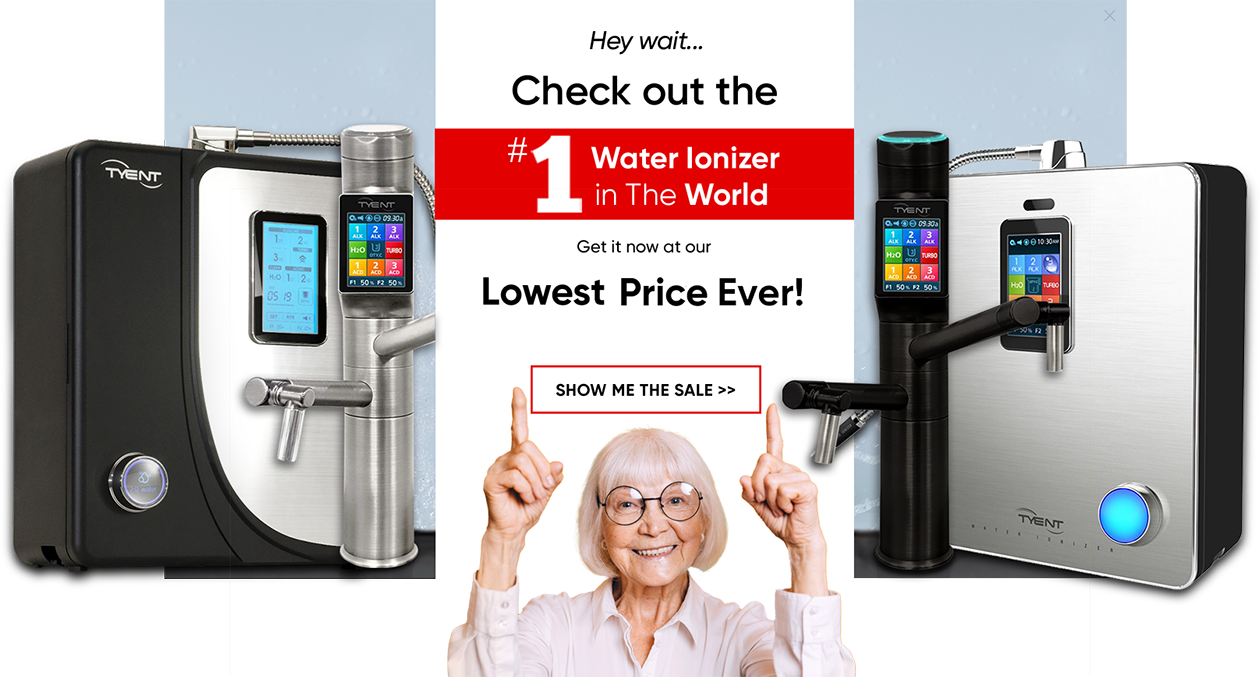